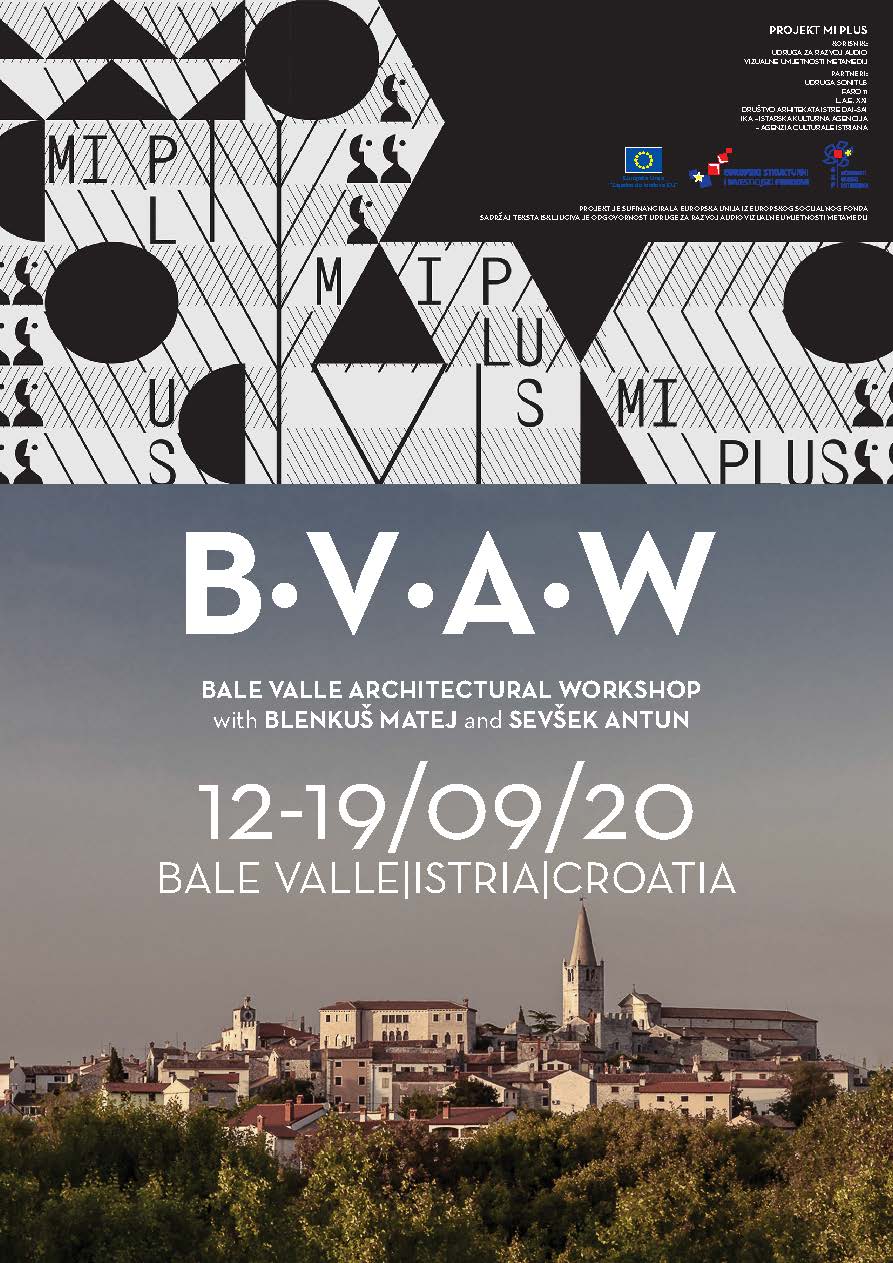 Bale Valle Architectural Workshop (BVAW) – Future centers, is an international program that will be held in Bale from the12th to the 19th of September 2020 and mentored by Matej Blenkuš (Ljubljana) and Antun Sevšek (Zagreb) and is intended for architecture students and young architects. Application for the seven days workshop is open until September the 8th!

The workshop organized by the Association of Istrian Architects DAI-SAI and Metamedia Association is also a part of the Mi plus project  (www.miplus.hr), engaged in the development of independent cultural programs and new media art, aiming to establish conditions for the funding of a cultural centre for production and independent culture in Istria. The funding of that type of center is in fact, the main topic of this workshop that will propose and make conceptual solutions for the conversion, that is, accommodation of a centre for production, presentation, and education inside an ex cinema hall in Bale.

The solution for oppositions of this kind, placing of an urban, global, and contemporary program into a rural, local, and historical context, holds the potential for the development of a unique cultural product in Croatia and Europe – an international reference centre for research, development, and use of contemporary art and new technologies.

Participation and accommodation for the workshop are free of charge, and those who are interested can apply here. Persons from other countries are obliged to verify if they will be able to attend the workshop in person, and in case of an inability to travel, they will be provided online participation.

Also, in the case of social gathering restrictions, the workshop will be held online. For additional information please write to kreativne.fabrike@gmail.com. email address.

Matej Blenkuš is the dean and an associate professor at the Faculty of Architecture of the University of Ljubljana. At the same time, he runs the architectural studio abiro in Ljubljana. He is a member of the Association of Architects of Ljubljana and the Chamber of Architecture of Slovenia. He graduated and received his Ph.D. at the Faculty of Architecture, UL, and received his master’s degree at the Helsinki Technical University, Aaalto University. For his master’s thesis, he received the award for the best study work in 1999. He participated in numerous national architectural competitions, open and invited, for which, along with co-authors, he received several awards and recognitions. He has more than 15 years of experience in design. For a comprehensive architectural opus, together with Miloš Florijančič received the highest professional platinum pencil award in 2015. He was repeatedly part of the national selection for the European Mies van der Rohe Award.

Antun Sevšek is a freelance architect and researcher who graduated from the Zagreb Faculty of Architecture in 2006. He has worked in local architectural offices where he participated in numerous award-winning competitions and realized projects, winning six awards with two first prizes among them: The Reconciliation Park in Vukovar and a new setup solution for the new Memorial Centre Lipa Remembers Museum, both in 2013.

He was part of the curatorial team of the international research project Unfinished Modernisations and the editor of the subsequent publication in 2012. In the following year, he curated, designed, and edited a series of exhibitions and a book titled Spaces of Co-Operation dealing with the recent history of spatial planning of Zadar County in Croatia along with Maroje Mrduljaš and Damir Gamulin and was awarded for this project in 2016 by the Neven Šegvić prize for best-published research, or theoretical work in architecture. He is a longtime member of Platforma 9,81, an NGO for research and education in architecture and urbanism. Since 2014 he has been active in the Right to the City and the Alliance Operation city organizations in Zagreb where is engaged with the topics of urban and national spatial planning, as well as with the analysis of urban management policies along with the development of new institutional models for socio-cultural centers.

The Mi plus project, co-funded by the European Social Fund and implemented by the homonymous platform whose members are: Metamedia Association, Faro 11, Sonitus, L.A.E. XXI, Association of Istrian Architects DAI-SAI, and Istrian Cultural Agency  IKA-ACI. Its main goal is to provide a long term and sustainable organizational frame, for civil society associations and public sector collaboration, development of collaborative programs for independent cultural programs and new media art, and also to establish conditions for funding of cultural center for production and independent culture in Istria by the civil-public partnership system.

Text content is the responsibility of the Association for audiovisual arts Metamedia.